Battlestar Galactica is based on the famous TV series with the same name, and this licensed slot machine was created by Microgaming.

In Battlestar Galactica, you’re going to encounter many of the actors that played in the modern version of the series, though not all of them. Using the official license, the slot includes real photos of the actors and has a design that seems to fit what we’ve come to expect from this very well done sci-fi show. Microgaming included in this game 243 ways to win, which pay starting from both sides, and which can offer up to $3,750.

With all the symbols with actors from the series, and with the animations which start up when they form winning combinations, it’s not difficult to like this game. There are a few playing cards in there as well, but they didn’t bother me too much.

One of the things I’ve appreciated about this slot is that it will pay starting both from the leftmost and the rightmost reel. You don’t even need symbols to be on fixed lines, they just have to be on the right reels.

You can get the Battlestar Galactica logo stacked on the 1st reel, while in the other positions it is regular sized. This would be the wild feature of the game, the one you rely on to get you winning combinations. It only needs to be on the right reel to be of help, so it should be much more useful in this game than in others.

The Viper Fighter is the scatter icon. The top payout of $3,750 is obtained when five such symbols are present on just as many reels, and it would be a prize of 50x the wager. Have three or more Viper Fighter icons present, and you also get 15 free games and a 3x multiplier for the wins.

There are a couple of random features that can be triggered as well, including the Ion Storm (gets you up to five wild reels), Run (turns playing cards into mystery symbols) and Fight (random symbols turned into wilds which can split).

If you’re a fan of Battlestar Galactica, this slot machine is not a bad game to try out. There are plenty of other licensed games which got it wrong, but this one does OK. 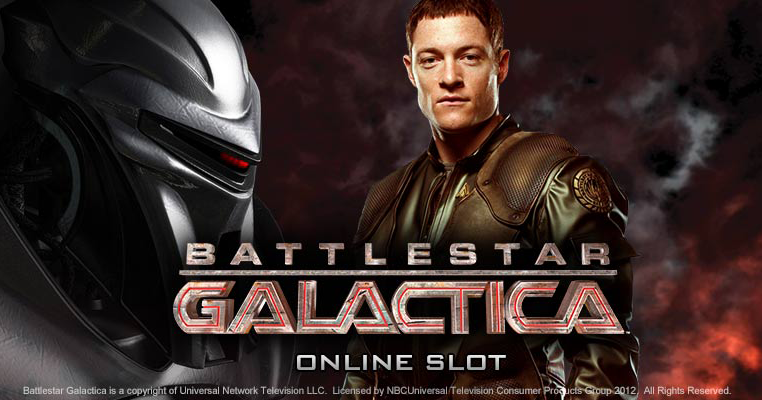