Blood Suckers is a vampire themed game, but one that doesn’t try to turn these monsters into supermodels for the teen generation.

One of the games offered by Net Ent, Blood Suckers doesn’t seem to have the same level of quality in the design as most of their titles, so it’s possible that it’s one of their older slot machines. The theme is vampire inspired, with the monsters appearing on its reels looking much more scary than they are shown in most slots with similar topics. There are a total of 25 bet lines, 5 reels for the symbols to appear on, and the prizes can be as high as $15,000 from a single combo.

It’s quite rare to see a slot machine which shows you vampires and which makes them look scary, as opposed to beautiful enough to make a lady faint just by looking at him. You get the real version of the vampire here though, at least the way this creature was first portrayed in Dracula, the Bram Stoker novel. You have various characters on the reels, victims and tools that are used to kill the creatures of the night.

A coin of $0.01 to $0.50 can be used on each line, though the player has the option to increase the bet level and use up to four in each case. Spending up to $2 for each payline is a possibility, which would take the total value of the bet to $50.

One of three feature symbols, the wild gives us the vampire as he’s about to bite on the neck of a blonde woman. Wilds don’t substitute for scatter or bonus symbols, but they do form combinations of their own, and they pay 7,500x the line bet, meaning the slot’s jackpot.

With the Vampire Bride symbol, you’re getting a scatter feature, one that pays up to 100x the bet and which triggers 10 free spins with 3x multipliers.

Finally, we have a symbol which has a wooden stake and a hammer, both of them drenched in blood. These bonus icons need to appear on a payline and going from left to right. Get three or more arranged this way, and you get the bonus feature. Inside, you click on coffins and you slay the vampires that sleep in them.

All in all, I rather enjoyed Blood Suckers, especially since it looks dangerous and scary, and not that fun to actually be inside it. Check it out for its features and its scary design, even if it’s not very pretty. 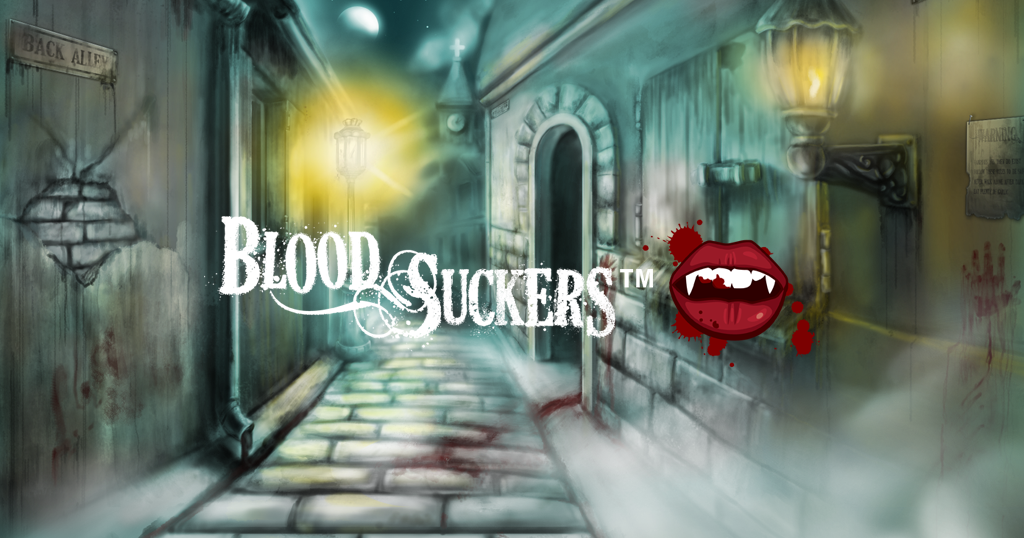