Eastern Delights is a beautiful Middle Eastern themed slot machine, a game with a lot of details from Playson.

Eastern Delights will take you into the middle of the sort of theme that you might expect to find in a story from the Middle East. It’s a gorgeous look inside the palace of one of the local rulers, with a lot of details and decorations built into every single object or character that is shown on the reels. The game has an unusual setup, with 21 lines on 5 reels, and it pays $1,500 at best.

It’s actually incredible how much detail went into the design of this slot machine. There are all sorts of objects from the Middle East, along with things like peacocks, fruits and sweets. There are some Royal cards as well, but they’re also very detailed.

You’re going to find that the game has a setup with 21 paylines on it, which is an unusual number to choose for a slot machine. For each payline, a single coin will be used, and its value will go up to $1. You end up with total bets of up to $21 this way, which should be within reach for most players.

You’re going to discover that the slot has a Symbol Drop mechanic, with the icons which are in winning combinations dropping off the screen, so that new ones can come in and form combos as well. If you get at least two consecutive drops this way, you win free spins. 2, 3 or 4 drops will bring you 1, 2 or 3 free games. You collect the free spins, getting up to 50 to add up this way, and at some point you will be able to trigger them, when you have three symbols with the Princess scattered on the reels.

A wild symbol will be used as well, and its image is that of a Question Mark. Have it appear on a payline where it is needed, and it will substitute for another symbol and get you a new win. It doesn’t do that for feature symbols.

The Magic Lamp icon forces a Symbol Drop feature, by destroying the icons found on the same horizontal line as it is. You also get a prize that is the equivalent of the round’s wager when this happens.

I loved the design of the game, and there is no denying that it does a good job with its features as well, especially when the Symbol Drop feature activates, which is often. 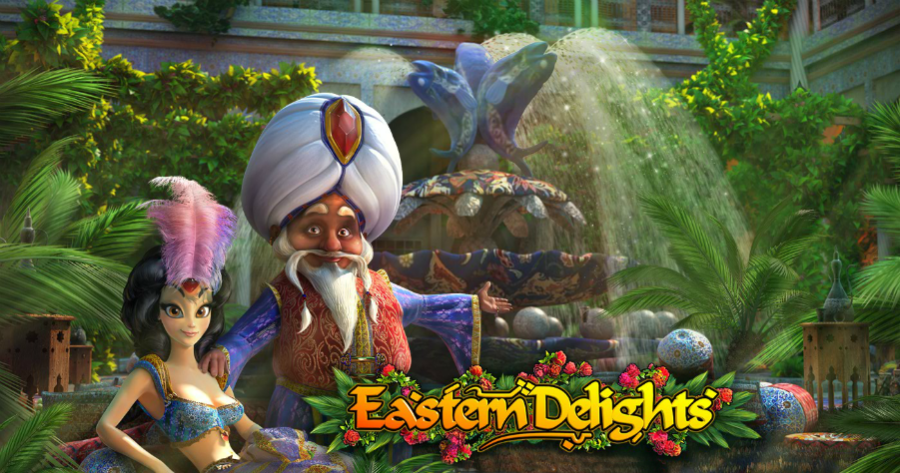