Offered on the Quickspin platform, Genie’s Touch is a slot machine that has a very definite Middle Eastern heritage and inspiration for it seems to have come from the famous story of the genie that grants three wishes when he’s released from the magic lamp that’s holding him. You will get from it 20 lines that you can bet on, with the prizes awarded being only up to $1,250.

The game’s design is definitely a plus in many moments, and that’s especially true if you get the various main characters to make appearances. It’s not as fun to get gemstones on the reels, but there are six of them and they’re unavoidable. They’re better than the poker cards from other slot machines anyway. The action seems to take place inside a palace from the Middle East, the building style being the right one for the theme.

You have a fixed number of lines, 20, so you just decide on the total value of the bet. You click on the Total Bet section, opening it up and choosing one of the available amounts, the lowest one being $0.20, while the highest one is at $100 ($5 per line).

The wild symbol is easier to find, having a logo marked Wild on a gold like background. It’s used both as a feature and as a way to form combinations which pay up to $1,250. It doesn’t replace Magic Lamps, but otherwise it works with all the symbols.

The Magic Lamp is the scatter symbol, the one which triggers a feature when it appears in at least three locations during the same round. They don’t have to be on the same payline, just on the five reels somewhere. This will trigger Genie’s Touch, a bonus game.

10 free spins are activated whenever the Bonus Logo appears, with three symbols during the same spin. Additional Magic Lamps are added to the reels. 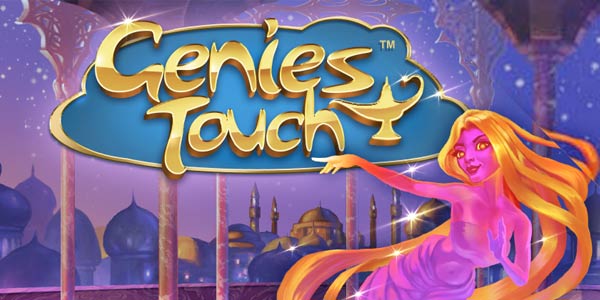