Rage to Riches has an interesting theme, not being about something that I’ve seen covered before. The main characters here seem to be building sized monsters, the kind that you would see in movies like Godzilla. An ape, a giant lizard and a wolf are the three monsters that are in a fit of rage here. The game sports 20 paylines and pays up to $5,000 normally.

The slot’s symbols appear as blocks of stone, and even the characters come like this. You have posters with the dangerous creatures placed against these walls, or you have poker cards which are spray painted on them. You see the town that’s vandalized by these monsters whenever the symbols are coming in, but most of the time it’s not going to be visible.

There are 20 fixed lines in Rage to Riches. You have the option to change the number of coins you wager on each line, up to 5, and you can use denominations of up to $1. With a line bet of $5 and 20 lines used, you can bet up to $100 each round.

Wild symbols sport the logo with Rage to Riches on it and it’s a feature that is a substitute, used for all symbols with the exception of the scatter.

The bonus game lets you see the monsters in action, as they destroy buildings while the military is firing at them. You trigger it by collecting scatter symbols and by landing the poker cards from Ten to Ace in order, going from left to right. Maximum payouts go up to 100x the bet.

With scatter symbols on the reels, you can get 10 free spins, and then you can retrigger them up to five times. You get guaranteed wins every 3 spins, so it’s a favorite feature for me.

The base game uses an avalanche like feature, with winning combinations going off the screen and new symbols coming in. Multipliers go up with each new avalanche, the maximum being 5x. 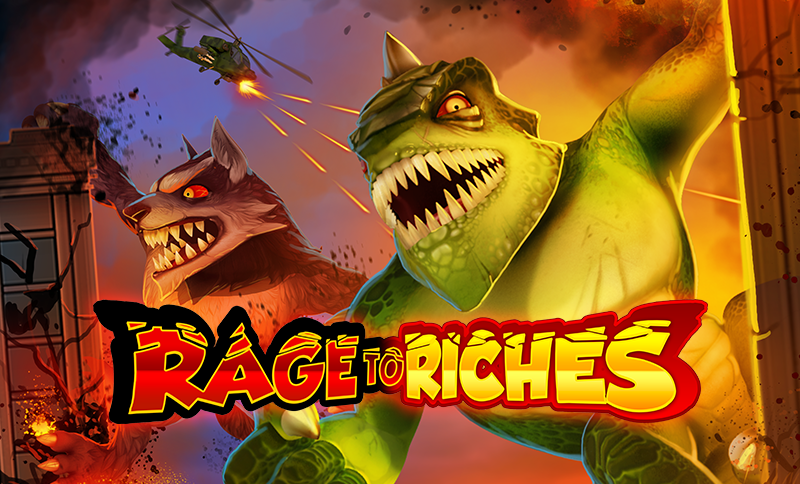