Sticky Bandits is the modern version of a Wild West slot machine, and a game that was created by Quickspin.

Sticky Bandits is the Wild West themed slot machine that you’ve probably seen in different forms many times in the past, only this time you’re looking at a version that Quickspin thought up. They’ve gone with a more modern approach, with bigger reels than normal and with mega symbols present on its reels. Some of the symbols that were used are appropriate for it, so you get images of bandits, beautiful women, money bags and the like, but there are also some pictures that I haven’t found as appealing, and as usual I’m talking about the poker logos here. Overall though, I think that you will find this a very well designed title.

You will find that you get 30 active lines for 5×5 reels, which doesn’t sound like a lot given the size of the game area. The game relies on Massive Wild symbols of two types and on free spins, for its features. A jackpot of $600 is the biggest one you can apparently take home.

Working with 30 active lines each round, you will be offered the chance to set the value of the total bet, and you will do so by picking from the list that Quickspin created, of values ranging between $0.15 and $90. The lines get at most $3 per line.

The most important symbols used in this game appear to be the Massive Wilds. There are two versions of these symbols, showing different bandits, one armed with a six shooter, the other with a rifle. The size of these Bonus Wild symbols is larger than usual, occupying 2×5 reels, so giving you up to 10 symbols with the ability of a wild at a time. These wilds are capable of substituting for all other symbols.

The Train Bonus symbol is going to be present on reel 1, and in order to get its feature you will need to combine it with a wild symbol appearing on the reel 2 or 4. If that happens, you get 7 free spins. The positions which have wilds on them at the start, will continue to be wild until the feature is over. Any other wilds that you might get, will be locked in position and will stay there as well.

Sticky Bandits is an exciting game, with great visuals and with some unique features, though the list is not very long for the latter. 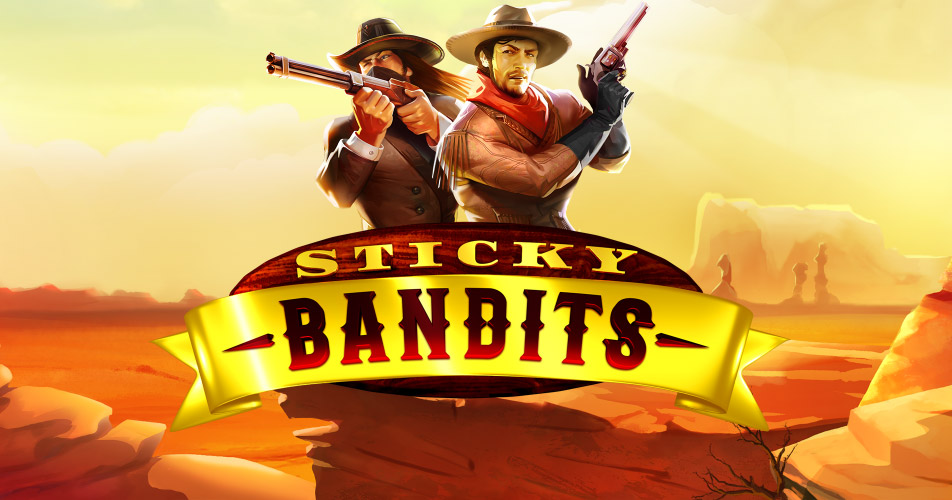