To the Rescue Slot review

A slot machine from NextGen, To The Rescue is a recent release of theirs, a game dedicated to the brave firefighters.

A game with a firefighting theme is nothing unusual, there are others from different developers, but this one has its own pros that it brings to the table. To The Rescue tells the story of a crew of firefighters that are trying to put out a huge fire, which has taken over an entire apartment complex. You see it in the background image, while on the reels there are 25 paylines which can form, bringing top jackpots of up to $20,000.

The cartoon style design of the slot looks good enough, but it’s not going to impress as much as other games would. There are animations in the background, of fire and smoke that are taking over apartment buildings. On the reels, you get playing cards and images related to the job of a firefighter (helmets, axe, badge, fire extinguisher, etc).

Both the number of lines and the value of the coins can be modified by the player. You have only 1 coin per line, so with 25 lines active you wager 25 coins. The value of the coins starts at $0.01 and can go as high as $4, allowing for maximum bets of $100 to be placed.

A Firefighter is visible in one of the symbols, the only one to have this image, so it will be easy to recognize. This would be the wild symbol, which the game uses on the three reels from the middle. Like all wilds, it’s a substitute for other symbols, and it doesn’t work with scattered Bell icons.

If you get the Firefighter on all three reels, you trigger a feature called To The Rescue. You pick windows from the buildings that are burning, and the aim is to locate a child that is inside. If you find the child, you get a big prize. There are three available chances for you to locate the right window.

The image of a Bell is used for the scatter icon, whose role is as usual, to appear in random locations and to give you prizes and free spins. The prizes need 2 to 5 symbols, and they are worth between 2x and 100x the wager. 3+ scattered Bell symbols will also trigger 10 free spins, which will have 2x multipliers.

The theme will have plenty of fans, of that I’m sure. The features are good as well, the prizes are above average, so all in all I’d say it’s a game worth playing.

Play To the Rescue here 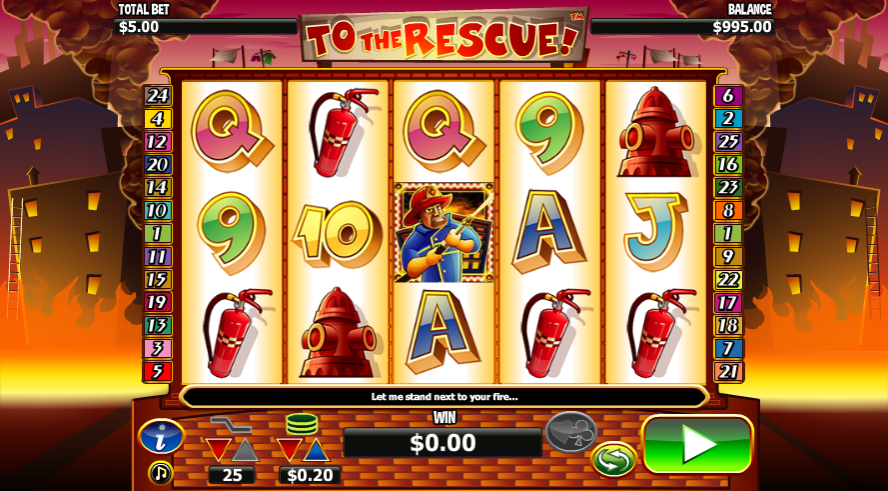