Arabian Nights is one of the games delivering progressive jackpots in NetEnt’s portfolio, and it is also Middle Eastern themed.

Arabian Nights gives a picture of 13th century Arabia and it’s going to be one of the few games where the graphics aren’t likely to impress you, out of those that you will find in the NetEnt collection at least. The developer is well known for crafting great looking slot machines, and less for their progressive jackpots, yet in this game it does things differently on both counts. The slot machine has several of the playing cards showing stone walls with colored playing cards built on the side. Then, there are the images of the themed icons, ranging from the Arabian trader, to his camel, a sword, the local pointy shoes, tents, hats and magic lamps. As I said, not the best design that you’re likely to see from NetEnt, not even close, but the game has other things for you to focus on.

While spinning 5 reels for Arabian Nights, the player has a progressive jackpot or a 10,000x reward to go after. There will be 10 lines present inside. Feature wise, it’s a game that delivers wilds, 2x and 3x multipliers, scatters and free spins.

You will get the option to modify the number of lines, but there will be always be a $0.50 wager per line, so only a single fixed value coin may be used for each one. It’s the progressive jackpot that brings the game this limit, and the range is going to be $0.50 to $5 for it, with the recommendation to stick with the maximum.

The most important symbol that you will encounter inside is clearly going to be the Arabian Trader, which is the wild symbol and also the way for you to trigger the progressive jackpot. A combo of five symbols will do that or will give you 10,000 coins. As a substitute, it has the ability to multiply win values by 2x, if it’s included in combinations along with regular symbols.

As for the scatter, it will also pay very well, up to 500x the wager even if it lands enough times in view. Having it appear 3+ times gets you 15 free games and the multiplier is set to 3x (doesn’t work on the progressive jackpot).

Arabian Nights makes up for its lack of interesting graphics with the features and progressive jackpot that it can deliver. 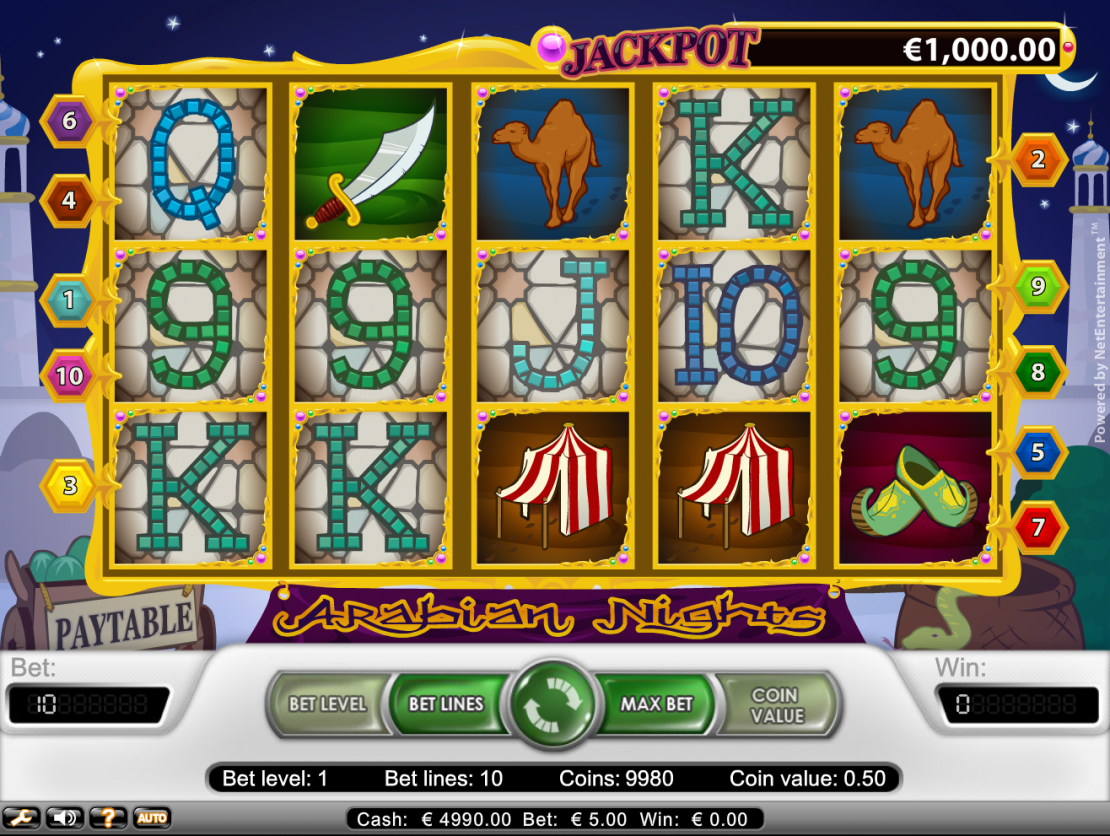